As first lady during the Depression and Second World War, Roosevelt was instrumental in how the US was run – and did much to advance women in that role.
Zora Simic | UNSW Newsroom

This piece is part of a new series in collaboration with the ABC’s Saturday Extra program. Each week, the show will have a “who am I” quiz for listeners about influential figures who helped shape the 20th century, and we will publish profiles for each one. You can read the first piece in the series here.

“Well-behaved women seldom make history” is a phrase frequently trotted out around International Women’s Day, and just as frequently attributed to Eleanor Roosevelt. It doesn’t matter that the former first lady of the United States never actually said this – in fact, it was Pulitzer Prize-winning historian Laurel Thatcher Ulrich in an obscure academic article in the 1970s – the misattributed quote endures, further cementing Roosevelt’s reputation as one of the most inspiring women of all time.

This year has also seen the unveiling of the Eleanor Roosevelt Barbie Doll, another marker of her iconic status. In this she has joined the “Inspirational Women” series — following, among others, Maya Angelou, Florence Nightingale, Frida Kahlo and her friend, aviator Amelia Earhart. (Whether she would have approved is another matter.)

Despite her 1.8-metre fame, or perhaps because of it, ER – as she was colloquially known – was not one to draw extra attention to herself. However, she came to excel at using her platform to uplift others or promote her favourite causes, including women’s rights and racial equality.

Read more: Why politics today can't give us the heroes we need

Two days after Franklin D. Roosevelt’s inauguration as the 32nd president of the US in March 1933, the new First Lady held her first White House press conference for women reporters only. This was the first of 378 such events, offering unprecedented access for women journalists over the 12 years, or three terms, FDR was in power.

In another historic first, Eleanor Roosevelt twice invited African American contralto opera singer Marian Anderson to perform at the White House – including for King George VI and Queen Elizabeth during their US tour in 1939. In the same year, behind the scenes, she lobbied for Anderson to perform an open-air concert in front of the Lincoln Memorial in the then racially segregated capital – a performance since described as a “watershed moment in civil rights history”. 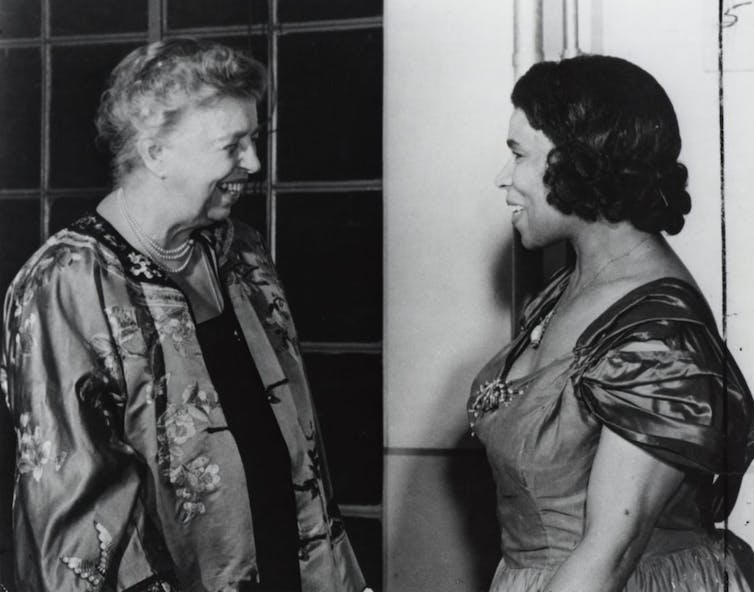 Against the backdrop of the Great Depression, the Democrats’ “New Deal” and the second world war, ER transformed the first lady role from largely ceremonial to a much more publicly and politically engaged one.

As well as opening the White House to new constituencies, she extended her duties far beyond the official residence. With the president’s mobility compromised by his paralysis, ER was frequently dispatched to gather evidence, inspect government works and assess public opinion within the US and sometimes internationally. Her extensive travel made her an easy target for media satire – “Mrs Roosevelt Spends Night at White House” ran one headline – and earned her the nickname “Eleanor Everywhere” (now the name of one of several children’s books about her).

Her most famous overseas trip was the five-week South Pacific tour of 1943. Travelling as an ambassador for the American Red Cross, she was flown 25,000 miles on a four-engine military plane, the Liberator, from San Francisco to Hawaii, on to the Pacific Islands, New Zealand and Australia, and back again.

In Australia, thousands lined the streets of Melbourne, Sydney and Brisbane to greet her. In Canberra, she became the first woman ever to be an official guest at a luncheon at Parliament House. Prime Minister John Curtin toasted her by saying “you are one of the most distinguished figures of our age”. 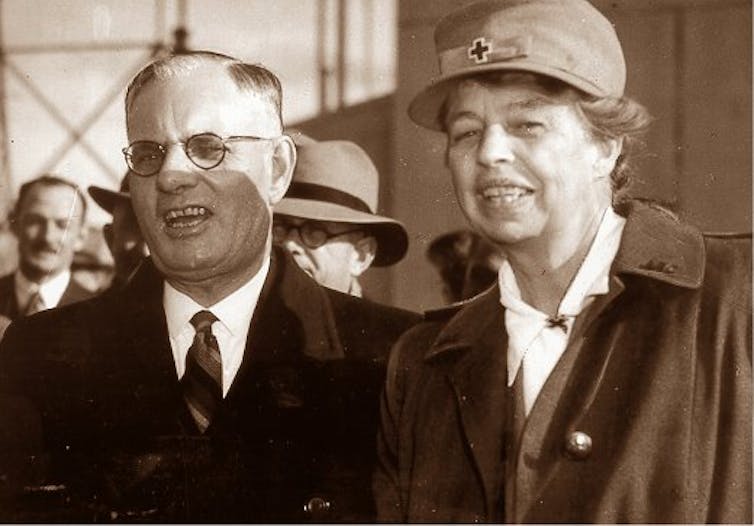 ‘ER’ with Prime Minister John Curtin on her trip to Australia in 1942. Photo: ozatwar.com

The First Lady dutifully reported interesting observations about Australia in her widely syndicated My Day column. Privately, however, she found the official engagements exhausting and trivial compared with her core mission of visiting US service personnel. In her 1949 memoir This I Remember, it was the impact of meeting American GIs in military hospitals that lingered with her. She wrote:

The Pacific trip left a mark from which I think I shall never be free.

Roosevelt’s My Day column ran six days a week from 1935 to mere weeks before her death in 1962. In that time, she only ever missed four days – when her husband collapsed and died, just months into his historic fourth term in office in April 1945.

Not long after, the next phase of her life began when FDR’s successor Harry Truman appointed her US delegate to the United Nations, declaring her “First Lady of the World”. As Chairperson of the Commission on Human Rights (1946-51), she was a driving force in the drafting and adoption of the Universal Declaration of Human Rights in 1948 – although not the only one.

As First Lady, Eleanor Roosevelt was admired, but controversial. Now, she frequently tops US polls as the most popular First Lady in history. Fascination with her life and character has only increased, indexed by a steady stream of books focused on her private life — her marriage to womaniser FDR, her passionate friendships with women and men, who may or may not have been lovers – as well her public achievements.

Read more: Remembering Pearl Harbor and America's entry into the theatre of war

For Hillary Clinton, the former first lady most often compared to Roosevelt, Eleanor was so inspirational she is rumoured to have held imaginary conversations with her at crossroads in her political career.

Finally, inspirational quotes that Eleanor Roosevelt actually said or wrote continue to circulate. To end with one that captures how she herself redefined the possibilities of leadership: